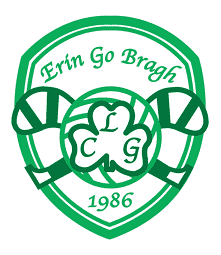 Eringo Bragh was founded in 1887 in Clonsilla. One of the earliest fixtures known is that at Porterstown on October 2nd V Wolfe Tones of Bluebell at 12.30. Erin Go Bragh was one of 120 clubs affiliated in Dublinin 1888. William Rogers was listed as club secretary, Paddy Dunne was captain and Laurence Warren vice-captain of the football team. Tommy Murphy, a blacksmith orignally from Kildare, was captain of the hurling team with L. Rooney vice captain. The team played their games in a field owned by Paddy Dunne in Coolmine, competing until 1889.

Erin Go Bragh fielded a single team in the Junior Sunday Football League for the 1904-1905 season playing their matches in the Phoenix Park. The club fielded two football teams in the 1905-1906 season, at Under Junior and Junior level. Erin go Bragh played their games in thePhoenixPark, Dolphins Barn and Lucan. The Junior team were winners of the Junior B Division and overall Sunday Football Junior League runners up receiving a walk over from Stars of Erin in Jones Road(now CrokePark) on July 29th 1906.

The Dublin County Board re-organised both Senior and Junior Leagues in 1906 by grading teams according to divisions. Erin go Bragh were placed in the Intermediate grade for the 1906-1907 season and the club also fielded a minor team. Thomas C. Murphy and Stephen Lynch of Erin go Bragh were selected to play on the Dublin inter league team against a Cork inter league team in a challenge game in May 1907. Thomas C. Murphy was appointed as captain. The game was played at Jones Roadin front of 3,000 people on May 26thending in a 0-6 points draw.Thomas C. Murphy was again captain when Dublin inter League team played a Louth inter league team in Dundalk. A second Erin go Bragh player whose first name is not known but second name was Hennesey also played on the day. Stephen Lynch was selected for a second game against Louth in Jones Roadon October 6th 1907 playing at centre half back.Dublin defeated Louth 0-9 to 1-4.

Erin Go Bragh participated in the Intermediate and Junior C Division in the 1907-1908 season. The Intermediate team were lying in fourth position at the Christmas break in the league having played five games winning four and loosing one to Parnells on a score line of 0-3 to 0-2. Francis Scully was selected for the Dublin inter league team to play Cork on Easter Monday April 20th 1908. George Fagan a founder and president of Erin Go Bragh passed away in 1907. He was a well known worker in the Irish-Ireland movement in the district controlled by the Magh-Liffey sub committee of the Gaelic League in North West Dublin. The club appears to be wrongly reported as being based in Chapelizod but The Freemans Journal. George Fagan was also honorary secretary of the St. Mochtas branch of the Gaelic League. He ws also a founding member of the Wolfe Tones Hurling club in Chapelizod in 1902 and a member of Green Flags during their existence.

Eringo Bragh fielded at Intermediate and Junior Division C level once again for the 1908-1909 season. But sadly appears to have disbanded sometime in either late 1908 or early 1909. Attempts to re organise the club for the 1910-1911 season was mentioned in the Sunday Independent on August 7th 1910 and a notice was placed in The Freemans Journal on Thursday August 4th for a meeting on Friday August 5th 1910. The Dublin Football League was also informed that a single team would be entering the league. The meeting was adjourned and a second meeting scheduled for Wednesday August 10th to make final arrangements for the season and to elect officers.

However attempts to revive the club fell through. The name Erin go Bragh was to remain from the field of play until 1917. Members of theEringo Bragh remained involved in Dublin GAA moving to other clubs. Thomas C. Murphy was appointed as a member of the Classification, Finance and Finance committee for the Dublin Football League. T.C. Murphy, two of the Murrays and Balfe joined Hibernan Knights following the failed revival of the club winning the Intermediate League the same year. T.C. Murphy was elected as Hibernian Knights league delegate, a position he had held with Erin Go Bragh since 1908. Murphy who had been refereeing games since 1905 continued to do so. He went on to be vice chairman and eventually chairman of the league in 1913. Murphy officated Dublins first senior championship 15 a side game at Croke Park.

Erin Go Bragh re-organised in 1917 and fielded a single team in the Junior Football League for the 1917-1918 season. They mainly played their games in the Phoenix Park. They fielded two teams for the 1918-1919 season. Along with a junior football team they also fielded at minor grade.

The Erin go Bragh Harriers were a cross country team set up in 1919 .Their formation coincided with the revival of the Leinster athletic and cycling championships which had lapsed over previous years. The team entered the annual GAA novices cross country championship organised by the Dublin County Board at Santry, over 4 miles on March 30th 1919. The team was made up of Thomas Callaghan, C. Samon, T. Hughes, Peter Balfe, J. Devlin, Henry Callaghan, Patrick Butler, M.J. Kennedy, James Mangan, John Balfe, Joseph Balfe, Thomas C. Murphy and B. Madden.

The organisation of the administration of Gaelic games in Dublin underwent a reformation in 1919. Thomas C. Murphy was elected as the first chairman of the Junior Board at its inaugural meeting in 1919 in which 100 clubs attended. The administration of gaelic games at senior and junior levels was to be carried out by two separate boards which was the outcome of a dispute involving C.J. Kickhams and the county board originating back to 1913. He was unanimously elected as chairman of the Junior Board after the withdrawal of three candidates the following year. Murphy was also appointed to the Cross Country subcommittee. Erin Go Bragh held an invitational cross country race over 5 miles in Blanchardstown with 31 participating on March 13th in 1921. The race was described briefly in the Sunday Independent on March 20th ‘as a grand spin over a nice country’ and ‘hope to see the example set by go Bragh imitated by other clubs’. The Freemans Journal had a more detailed account.

In 1922 Erin Go Bragh did not field any teams at Junior and minor football or junior hurling. Despite the clubs inactivity on the field of play, Erin go Bragh entered 2 teams one in the senior race and a second in the novice race of the Dublin GAA cross county championships on the 26th of March.Erin Go Bragh finished third in both races with only three teams competing in the senior race.

On Thursday November 25th 1943 the Irish press contained an article reporting the details of the annual convention of the Dublin Junior football board. Erin Go Bragh were named as one of six new teams re-organising for entry into the Junior football league. Only just a month previously the name Erin go Bragh had reappeared in the Irish Press. The club took part in a football tournament loosing to Green Flags, a club also in the process of re-organising for the coming season 0-7 to 0-3 in Lucan on October 31st, 1943. Erin go Bragh reached a league final on Sunday January 7th, 1945 loosing to Parish Gaels 3-3 to 2-5 in Blanchardstown.

The club appears to have disbanded sometime again after 1947. The club was reorganised again in the 1950s by Father Redmond parish priest in Porterstown, along with Paddy Downing from Clonsilla and James Lynam from Porterstown after a period of inactivity for a number of years. They played their games where St Mochtas soccer club now play on the Porterstown Road. They wore green and red colours like Mayo. The club won a minor league in 1963 before disbanding again in the early 1960s. Many members joined St. Brigids and some joined a club called Maurice O’Neills who played in the Phoenix Park.

The name Erin Go Bragh emerged once again in 1986 in Dromheath. The club was reorganised by a number of people who left St. Brigids including Cecil Stephens, Robert Stephens, Martin Stephens and Ollie Shanley. The first chairman was Joe Gerathy, secretary Jim Whittaker and treasurer K. Williamson. The club started out at juvenile level with 3 teams at Under 10, Under 12 and at Under 14. A junior football team was also founded and played in the then Junior Division 2. Their first game was against St. Brigids B team and attracted a crowd of around 250 people. They reached the quarter finals of the junior A football championship in their second year.

The club moved to Porterstown Park in Clonsilla and expanded at under age level with teams at Under 16 and minor level in 1996. The club was once again on the move in 2003 relocating to Clonee, Littlepace/Castaheaney, Ongar. The areas identified as one with a large and growing population but with no GAA presence. In September 2005 Fingal County Council allocated football pitches to the club. Former GAA President Mr. Sean Kelly formally launched Erin Go Bragh GAA Club in Littlepace/Castaheany on the 23rd November, 2005.

On Saturday January 30, 2010, the club installed temporary changing facilities in the grounds of the Mary Mother of Hope Primary school. The dressing room were officially opened by GAA president Christy Cooney and blessed by Father Eugene McCarthy on the 9th of May.

Stay up to date with everything going on at the club; News & Updates, Events, Fixtures, Match Reports and much more…